Wayne gained the DipWCF in October 1988 with honours.

He started his own farriery practice in 1994 in Settle, North Yorkshire. He shod a wide variety of horses but soon gained a reputation for shoeing lame horses working as a referral farrier for a veterinary practice.

Wayne became an approved training farrier in 1997 passing his AWCF exam in 2001. In 2004 he was employed at Myerscough College progressing to head farriery tutor in 2006. He became a qualified teacher in 2008 and gained the highest level of the Worshipful Company of Farriers, becoming an FWCF in the same year.

In 2013 he became senior tutor at Hereford School of Farriery until 2017 when he decided to go back to what he loved the best, shoeing horses. Wayne is a clinician both at home in the UK as well as abroad, with regular clinics in the USA, Israel, Poland and Denmark 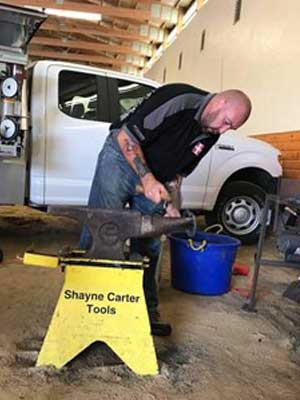